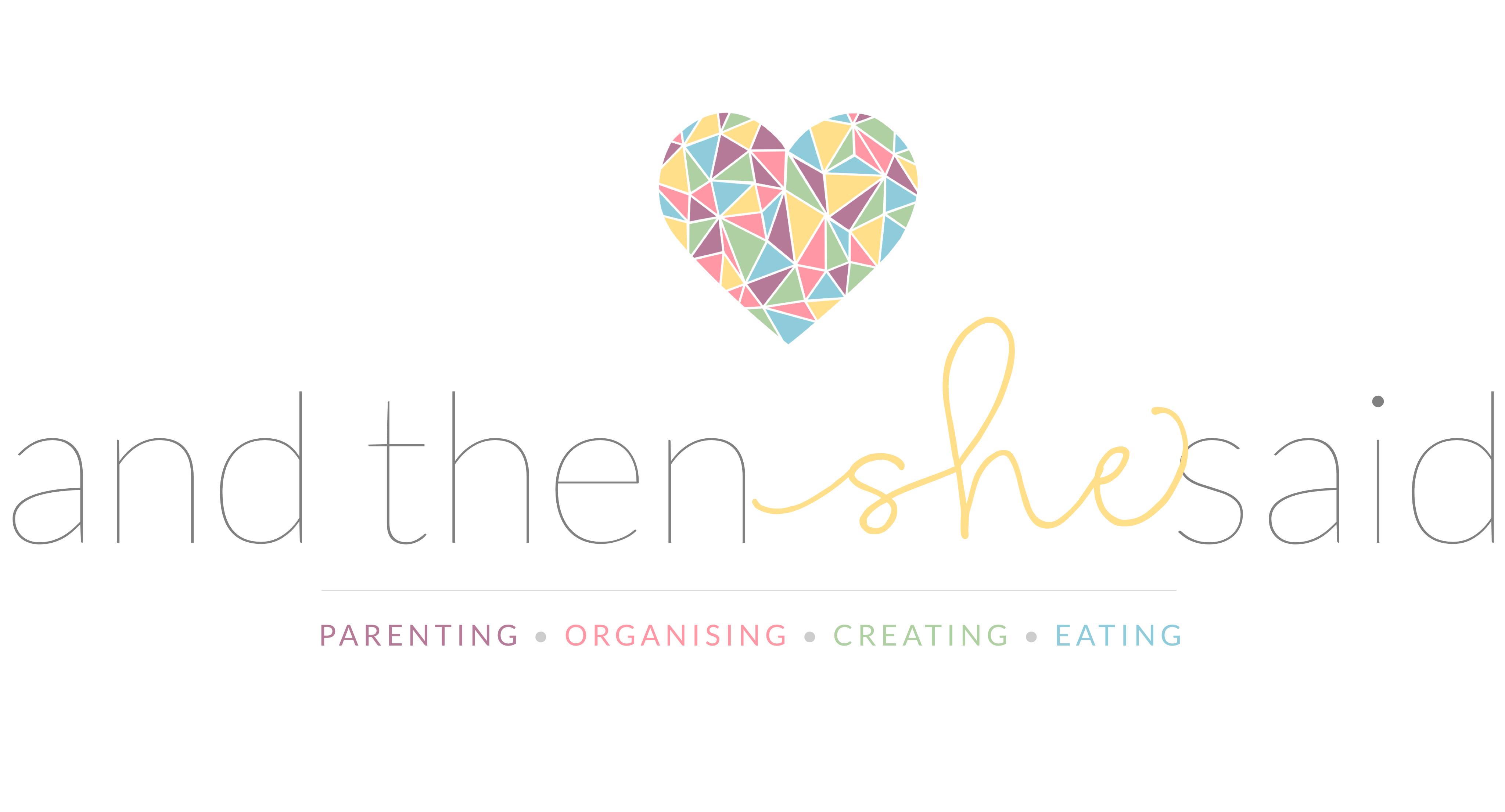 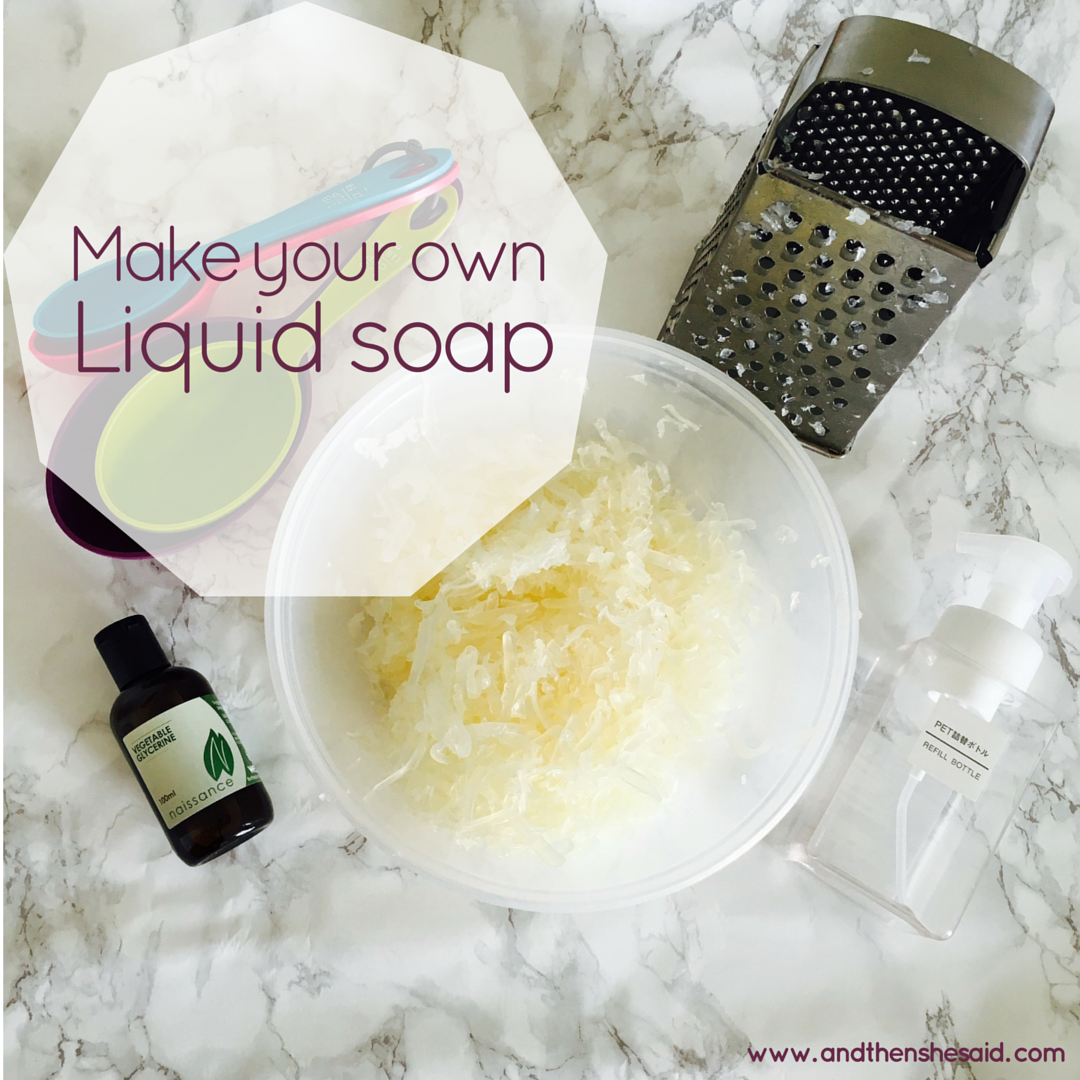 Creating• Make your own

Liquid soap: Make your own 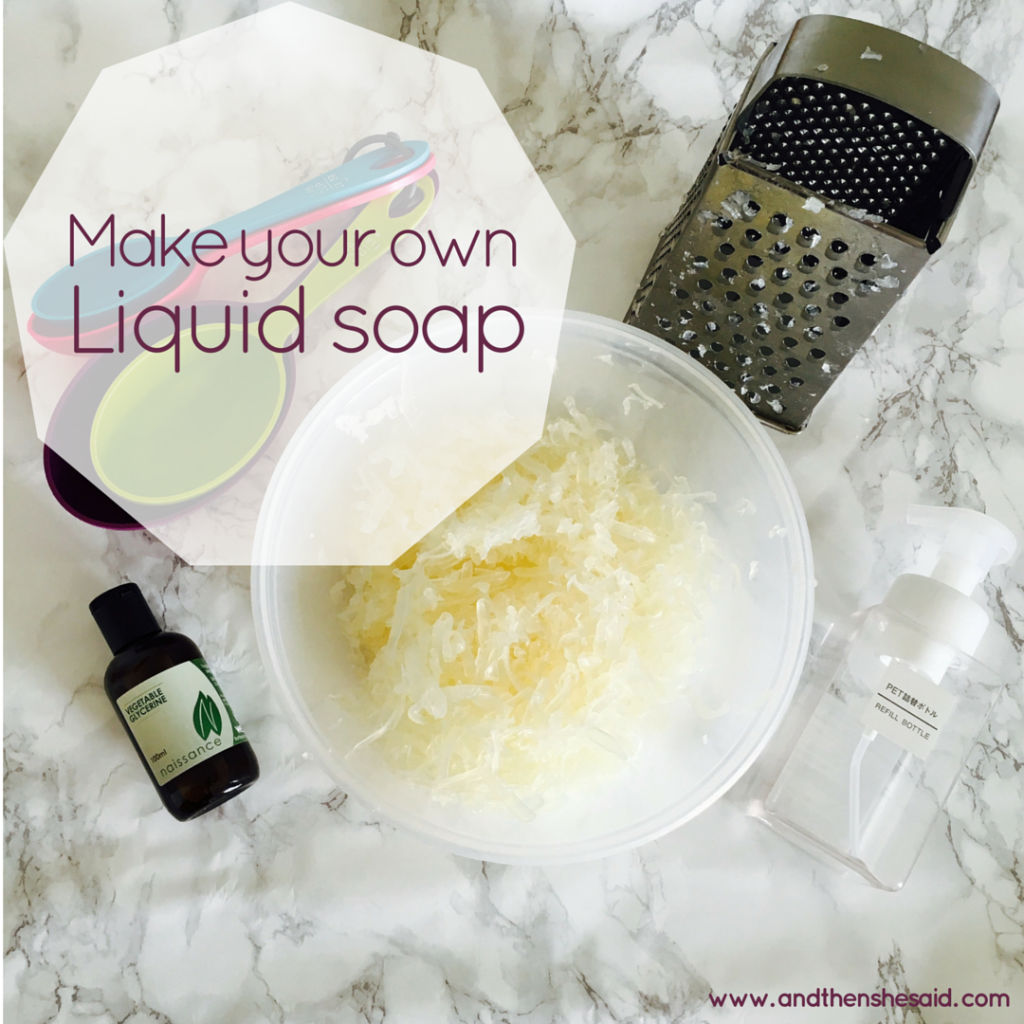 When Yusuf was diagnosed with food allergies and eczema, we tried what felt like a gazillion things in an effort to try and heal his sore skin, before I decided to only purchase and use natural products for us all. It was then that I came across Sunnah Skincare, who offer excellent quality products made using the finest organic, halal, and fair trade (where applicable) ingredients. I’ve been using their products for almost two years now and purchased their lavender and chamomile baby soap and shampoo in April last year. Their soap products arrive in bar form and you can use them directly on the skin and hair in the case of the lavender and chamomile bar, but given that bathing both the kids now is akin to wrestling with slippery eels, I decided to try turning the bar into liquid soap.

Liquid soap lasts a lot longer – especially if you use a foaming dispenser, and is a lot easier to dispense during bath time. I must confess I knew nothing about the process but have wanted to give it a go for ages. I watched several YouTube videos and given that this a vegetable glycerin-based bar, I wasn’t sure it would ‘perform’ the same as regular soap bars that were featured on the videos I watched, but I thought I’d try anyway.

You’ll need some vegetable glycerin, a grater, your soap of choice and water – that’s all! 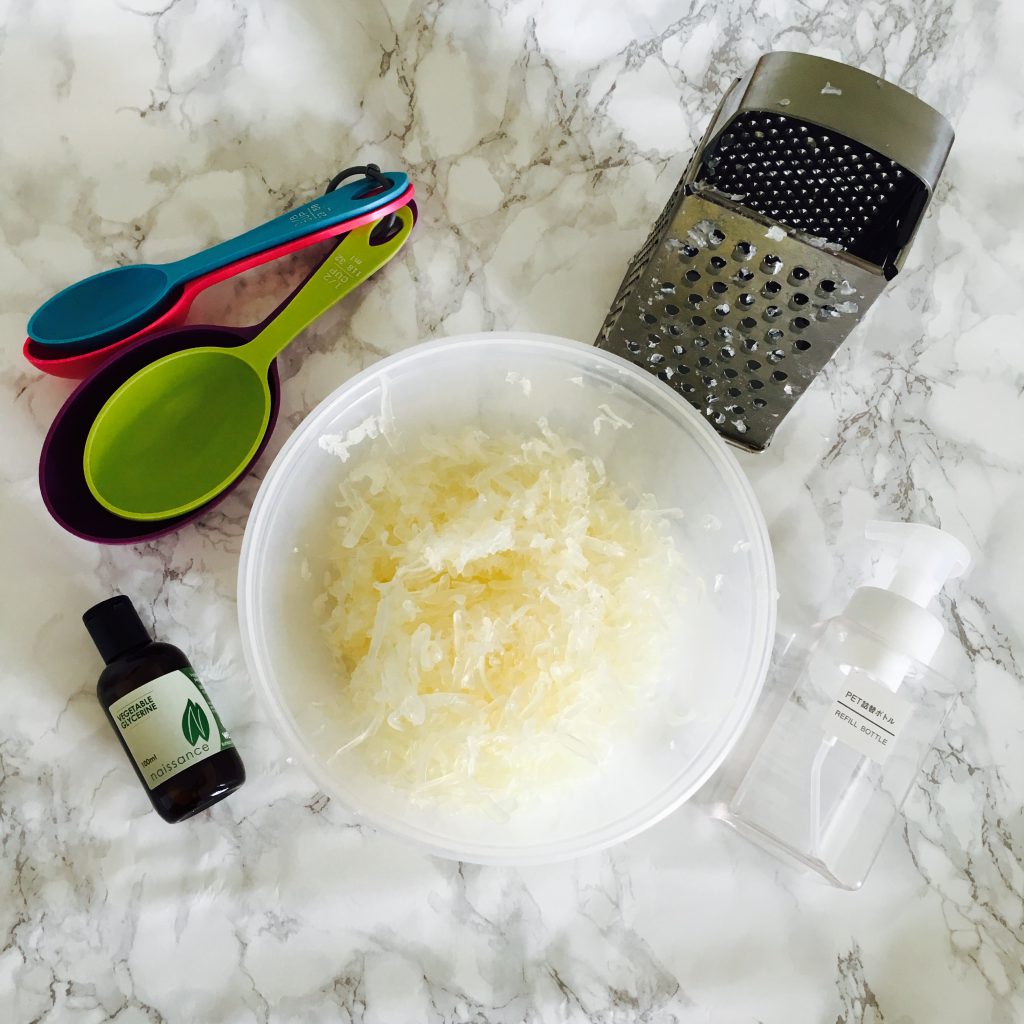 Now this was a LONG process for me, only because there was so much trial and error and we had a long week with so much going on, so I kept abandoning the bowl of soap to deal with it ‘later.’ You will need some time for it to set, so try to set some time aside to do this.

Step 1 – Grate your bar of soap. I just used my grater  for this and grit my teeth all through it because it’s the one thing I absolutely hate doing. I used the side with the large blades and got jelly like strips out of my bar of soap.

Step 3 – Bring your water to the boil. I was lazy and thought it would be far easier to boil a kettle of water and measure out the cups I needed and then just chuck the soap into that. It was – but not cooking it over the stove for a while may have been what led to mine not setting quickly enough! For every cup of soap, you will need about 7 or 8 cups of water. Every other recipe I saw recommended 10 cups but it looked FAR too watery to me at the 7.5 cup point so I just stopped there. I ended up adding all the rest of the soap into this  about 3 days later when it just would not set so I would think you only really need 3 cups or so per cup of soap. I think it’s different when it’s glycerin based soap.

Step 4 – Add your glycerin (this is the one I used and it’s quite inexpensive). I ended up using my entire 100 ml bottle. Stir until everything is incorporated and the soap has dissolved completely. 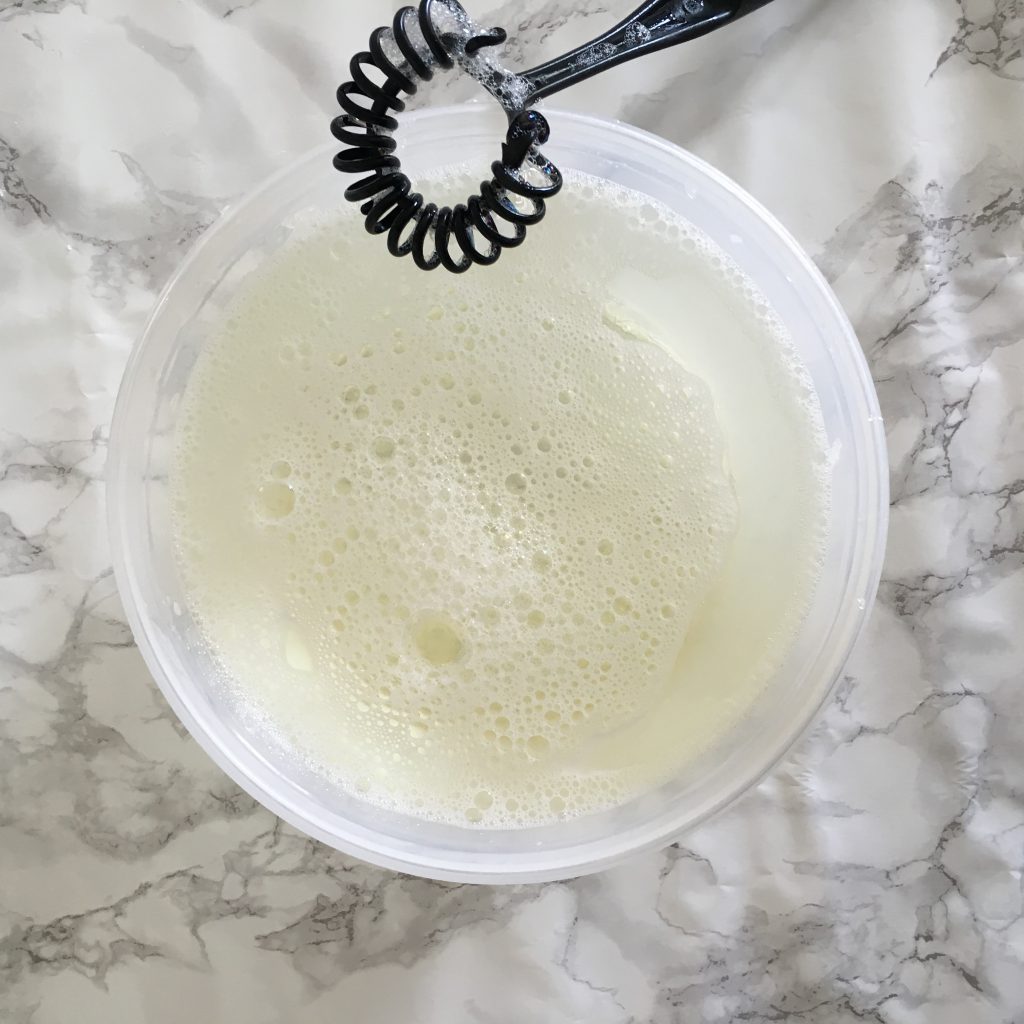 Step 5 – Leave to set until completely thick and then use a mixer to thin it out. If it’s too thick, you can add a little water. Even after whipping, mine was a snot-like consistency, and I’ve since read that that is because of the added moisture in the soap that I used. It doesn’t bother me because it’s in a foaming dispenser and dispenses well and lathers well, but if it bothers you, try running it through a food processor, or adding sea salt to it. 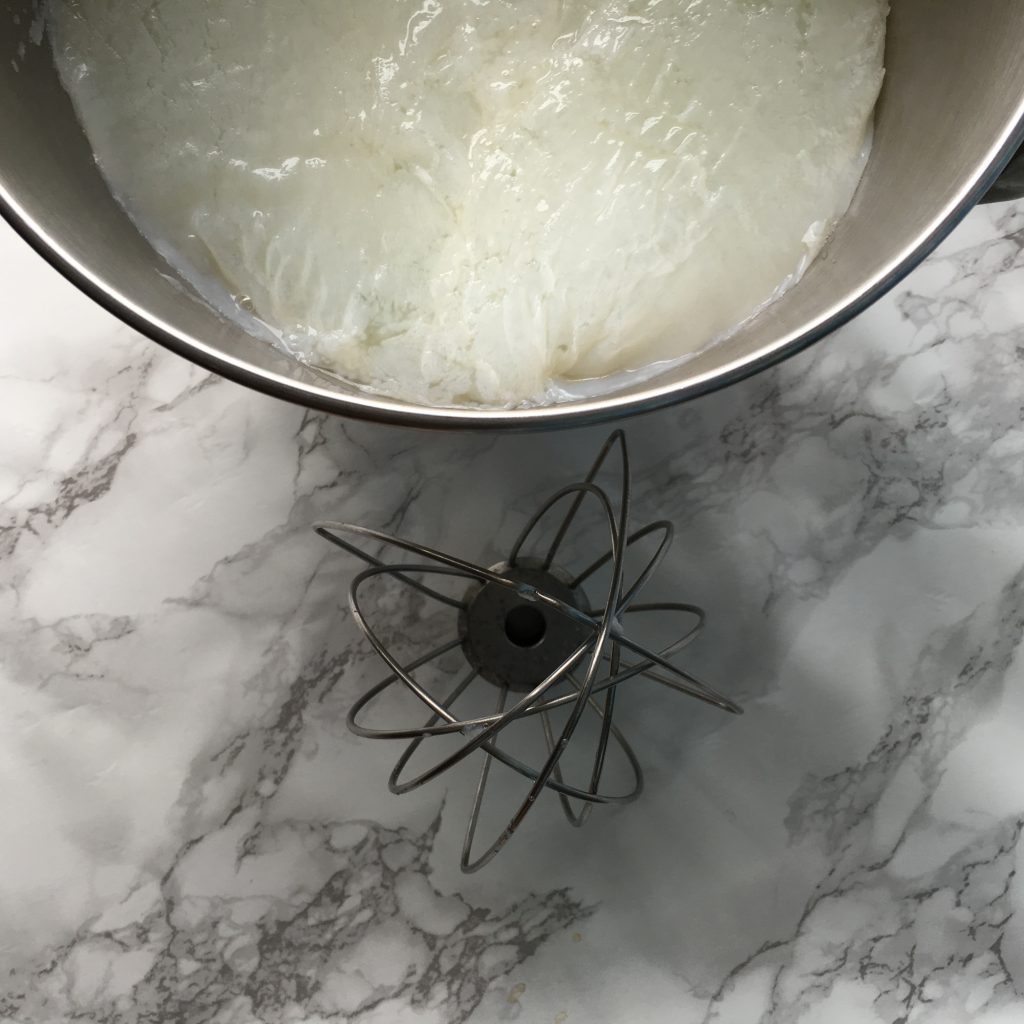 This bar cost me £11 or thereabouts and I’ve used it for over a year, have a dispenser (this one from MUJI is great) full of the liquid version, and a 1 kg tub that is storing the surplus. I imagine I’ll be using this for another year at the very least. To spend a fiver a year on bath soap and shampoo for two children is more than a bargain. If you try this, I’d love to know how yours turns out! If you use natural alternatives too, I’d love to hear about them in the comments! 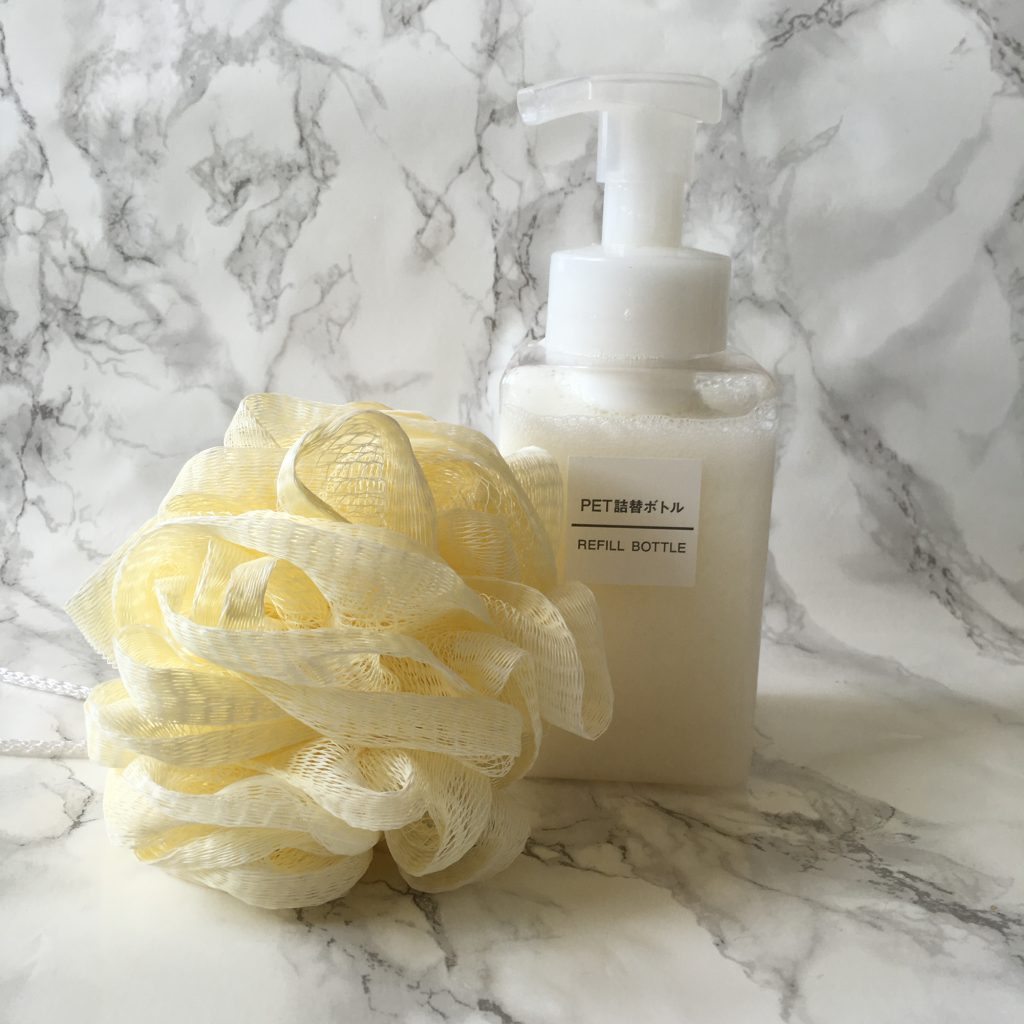 This is not a sponsored post. All products purchased and opinions expressed are my own.

Iman is a working mum of two, a wife and organising junkie. She blogs to share the beautiful, chaotic, ever-changing life journey that she's on through her parenting experiences, organising and creative projects, great finds, and lots of family friendly recipes. 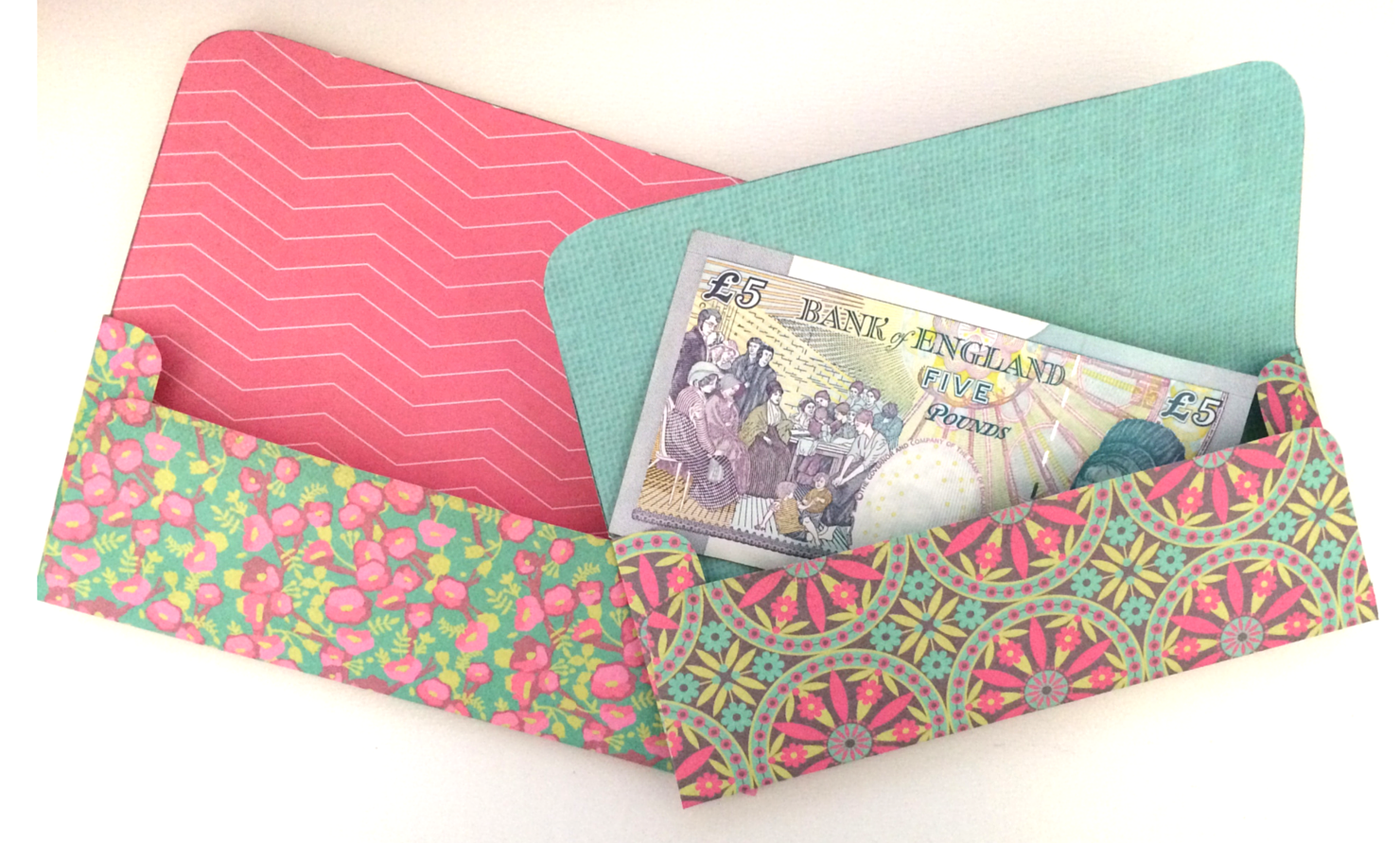 Make your own money wallets 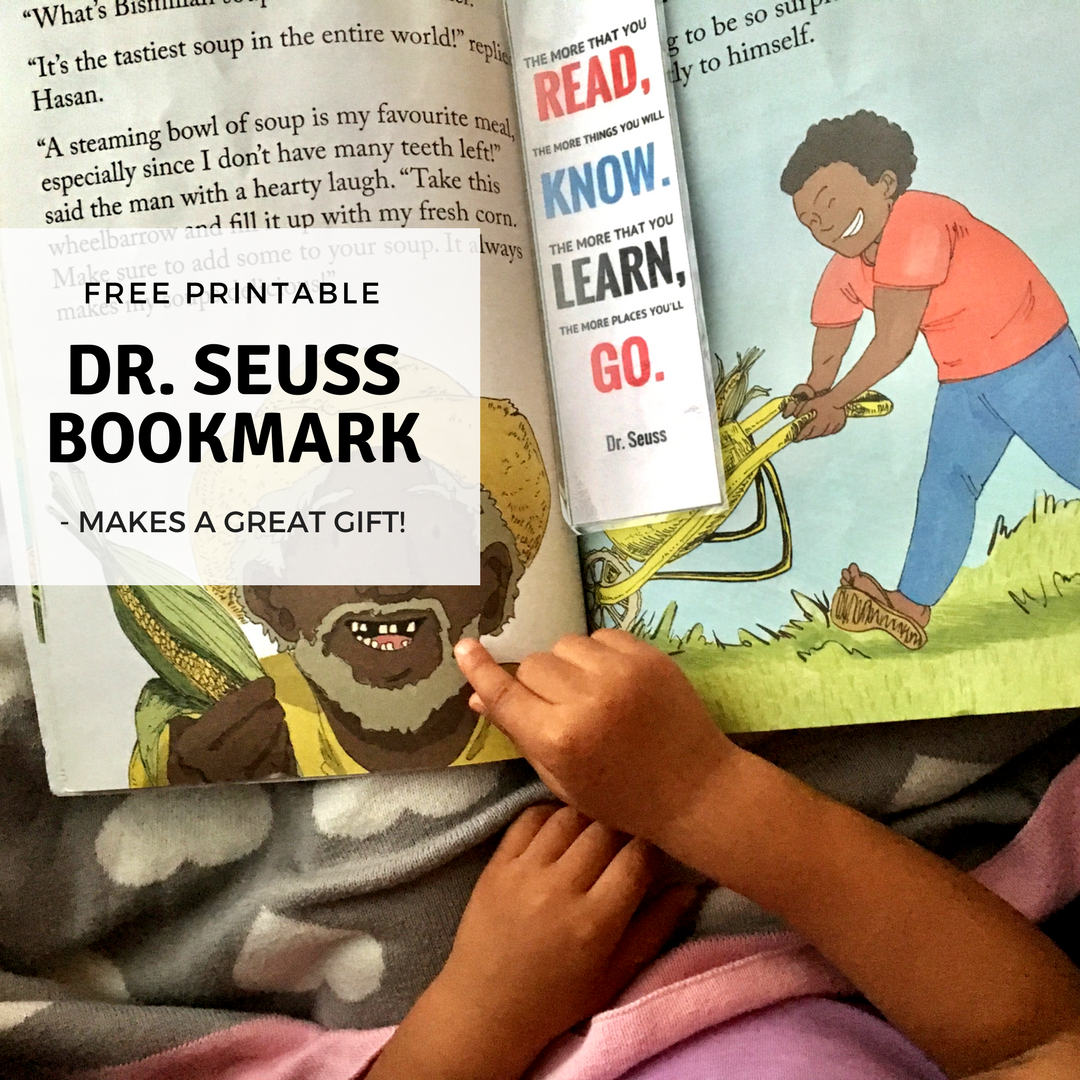 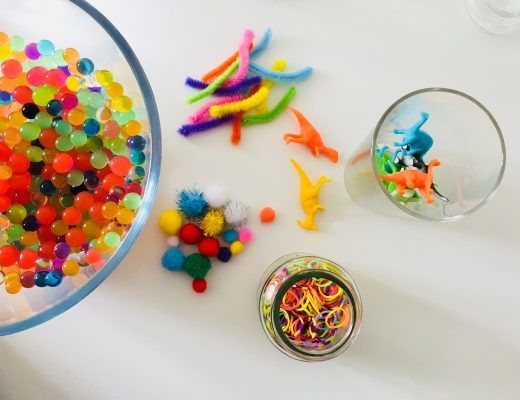 Sensory calm down bottles that your toddler can make!

This site uses Akismet to reduce spam. Learn how your comment data is processed. 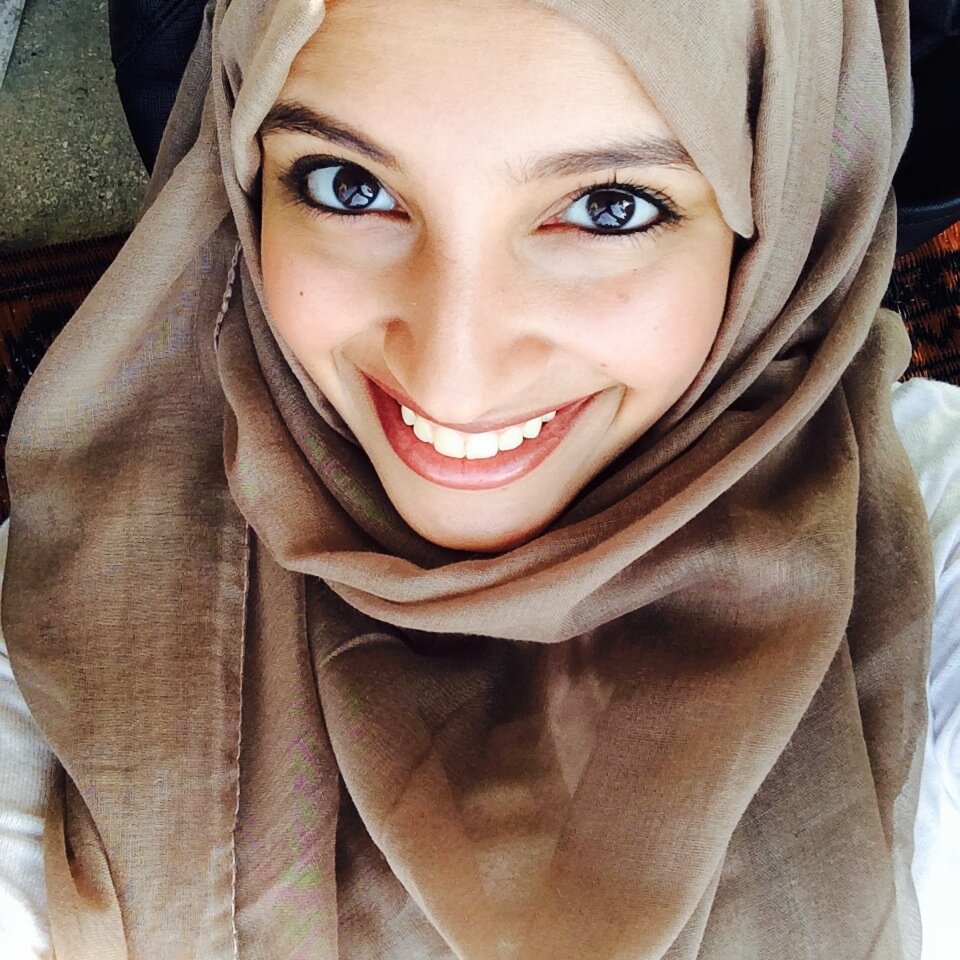 Iman is a working mum of three, a wife and organising junkie. She blogs to share the beautiful, chaotic, ever-changing life journey that she's on through her parenting experiences, organising and creative projects, great finds, and lots of family friendly recipes. 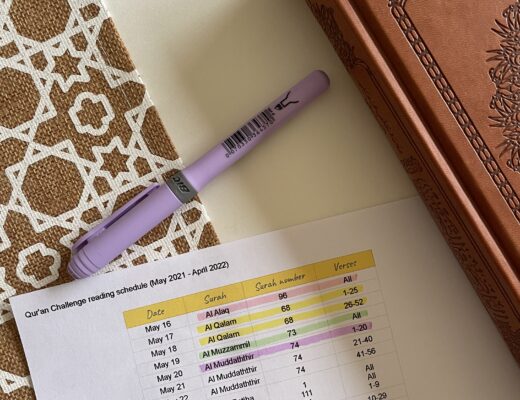 From Eid to Ramadan: A reading schedule to complete the Qur’an 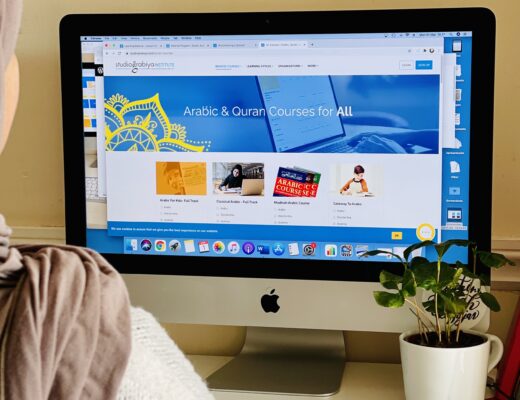 How important is learning Arabic to you? 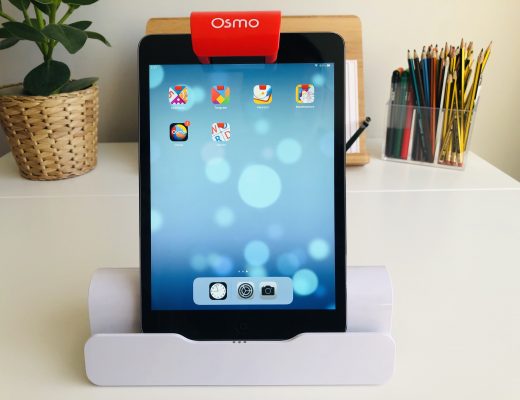 Interactive learning and hands on play with Osmo 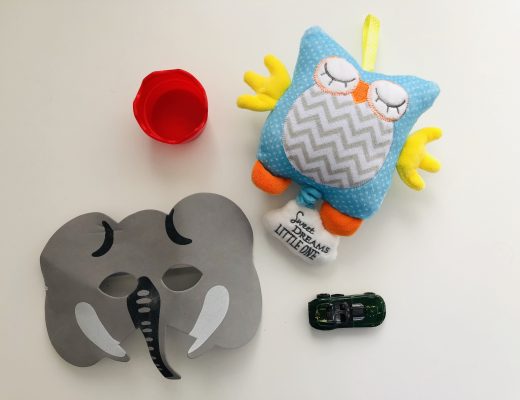 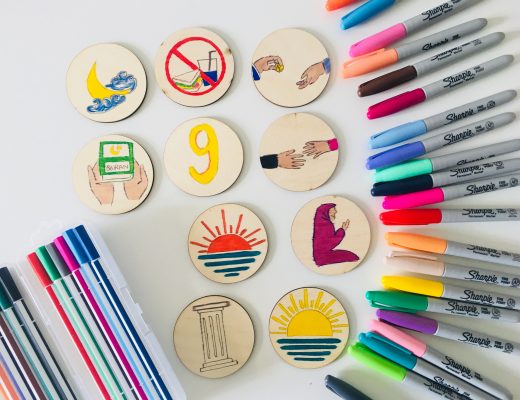 AND THEN SHE RECOMMENDED

‘And then she said’ is a participant in the Amazon EU Associates Programme, an affiliate advertising programme designed to provide a means for sites to earn advertising fees by advertising and linking to Amazon.co.uk.

Copyright 2018. And Then She Said. All Rights Reserved.